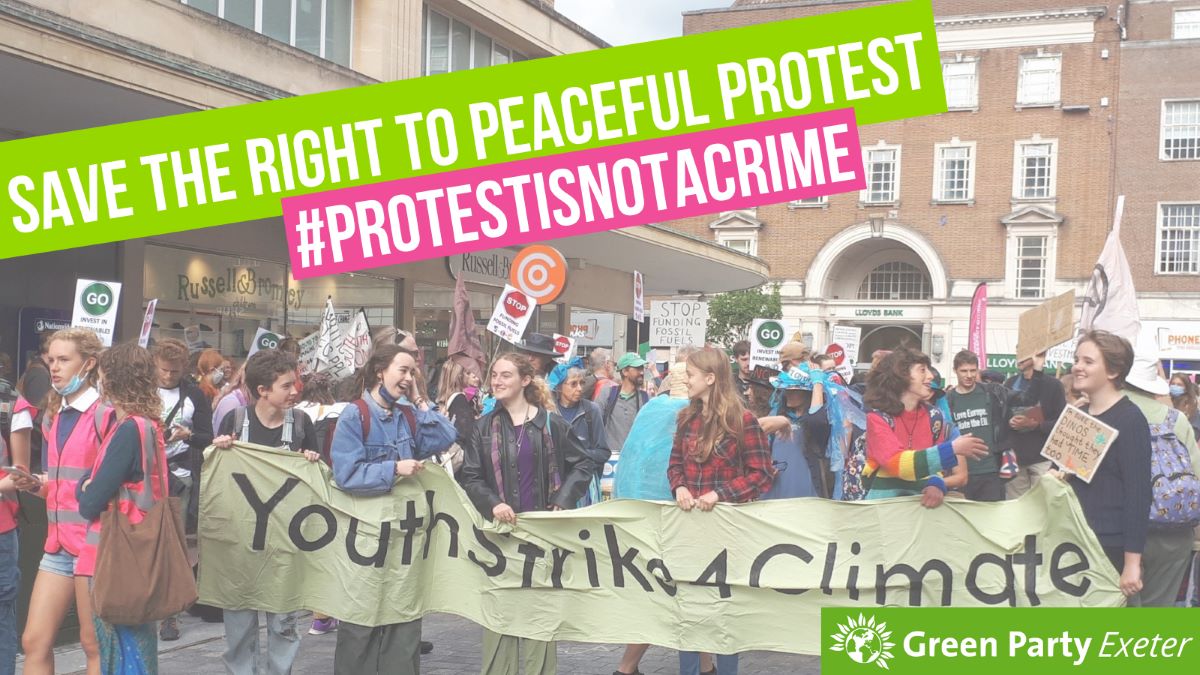 The Progressive Group of councillors on Exeter City Council have written to Ben Bradshaw, MP for Exeter, urging him to push for Labour peers to vote down amendments to the government’s ‘dangerous, draconian and undemocratic’ Police, Crime Sentencing and Courts Bill [1]. The amendments would effectively give both police and government ministers the powers to ban, limit or impose restrictions on peaceful protests.

“This is a dangerous, draconian and undemocratic Bill which, if passed, will grant the police powers to stop any protest. The criminal offences created by the Bill and its amendments carry a maximum sentence of 51 weeks in prison. The Bill clearly contradicts Article 11 of the Human Rights Act, which protects our right to protest by holding meetings and demonstrations. Protest is not a crime - Labour must vote The Police Bill down.”

“Peaceful protest has a long and proud history in Exeter and continues to flourish. From anti-war protests to Black Lives Matter and from Stop Brexit to climate protests by young people, protest is a vital part of a healthy democracy in our city and must be defended.”

“We know that Ben Bradshaw has taken part in and spoken at many protests in the past. We are seeking reassurance from him that he will do everything in his powers to oppose this terrible Bill.”

“Currently the Police Bill is in the Lords and Labour peers have an opportunity to block its worst excesses. But they must vote against. Abstaining will not prevent its passage through the Lords.”

In a separate letter, the Progressive Group have also written to City Council leader Phil Bialyk, urging him to discuss the Bill with all Labour councillors and support the call to vote the Bill down [2].

“The Police Bill opens the door to dictatorial powers that would remove some of our most basic democratic rights and freedoms. They would enable the government, or future governments, to turn the UK into a police state. We need our MP and councillors to take a stand against this assault on our right to peaceful protest.”